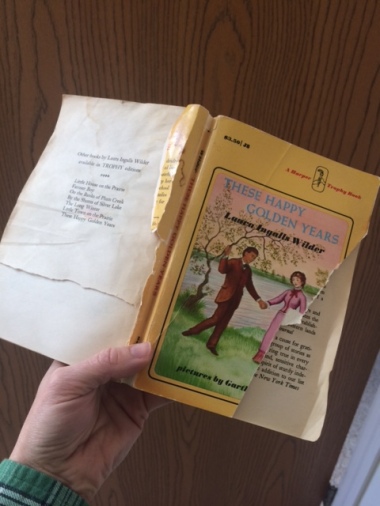 My copy of These Happy Golden Years has seen better days. The rest of the boxed set looks the same. For awhile I toyed with the idea of buying a new set especially when I saw a large read-aloud edition. But there is something homey about reading the same copies of the books that your mother read to you when you were a kid that became the same copies you have read over and over again.

I needed something to read the other night. I wanted fiction since I had read a bunch of history lately. So I decided to read The Long Winter since it was winter. Once I had finished that, I wanted to read the end of the story, so to speak, so I skipped over Little Town on the Prairie and went right for These Happy Golden Years.

This time I did something different. I read the book in one sitting. Unintentionally. I just couldn’t put it down!

Wilder is a master at writing simple show-not-tell descriptions.

And in this book, she wraps up the series theme of going west by showing the characters who still long to go further west, but know its time to settle. She even sends some characters back east and shows how Ma’s family and Almanzo’s family has moved. All the reports of moving help Laura comes to term with the fact that her life will move on beyond the Little House.

Two other things I loved:

The courtship. Laura is naive, silently stubborn, and falls in love without her really knowing it. Not that love is mentioned in the book at all. It’s not. But again, Laura writes by showing, not telling. There isn’t even much dialogue between the two recorded for us to read about what they talked about during their hours of buggy rides. Laura tells Almanzo early on she’s not interested in him as a beau. But he patiently persists taking her on sleigh rides and buggy rides. Mary says, “why do you want to marry him and leave home?” Laura answers “I guess it’s because we just seem to belong together.”

Laura tells Almanzo early on she’s not interested in him as a beau. But he patiently persists taking her on sleigh rides and buggy rides. When Laura agrees to marry Almanzo, Mary asks, “why do you want to marry him and leave home?” Laura answers “I guess it’s because we just seem to belong together.”

The theme of independence. Laura continues to be independent in character. I love when she rides with Almanzo while breaking in Barnum, the runaway horse. They race down Main Street and see a crowd of men watch them in awe including Cap Garland who has a big grin. He was the only one who guessed Laura would ride behind Barnum. Later on, Almanzo says to Laura, “you’re independent, aren’t you?” She doesn’t really answer, but when she accepted his proposal I was reminded of Hermie from Rudolph the Red-Nosed Reindeer who said, “let’s be independent…together!”

This site uses Akismet to reduce spam. Learn how your comment data is processed.